In 2017 – this ambitious goal was reached.
NO MORE STAMPS ARE NEEDED!!!
The HSP sincerely THANKS ALL who have contributed stamps over the past decade!

in October of 2019, the stamps, and collages created by our students over the past decade were donated to the American Philatelic Society in Bellafonte, Pennsylvania. The APS is creating an exhibit to display the stamps for the world to see! Representatives from the APS made the trek to FRCS to transfer the 18 original artworks and dozens of plastic tote boxes filled to the brim with donated stamps to the museum where they will soon be on display. We had so many stamps, that they had to make two trips to FRCS to collect them all! 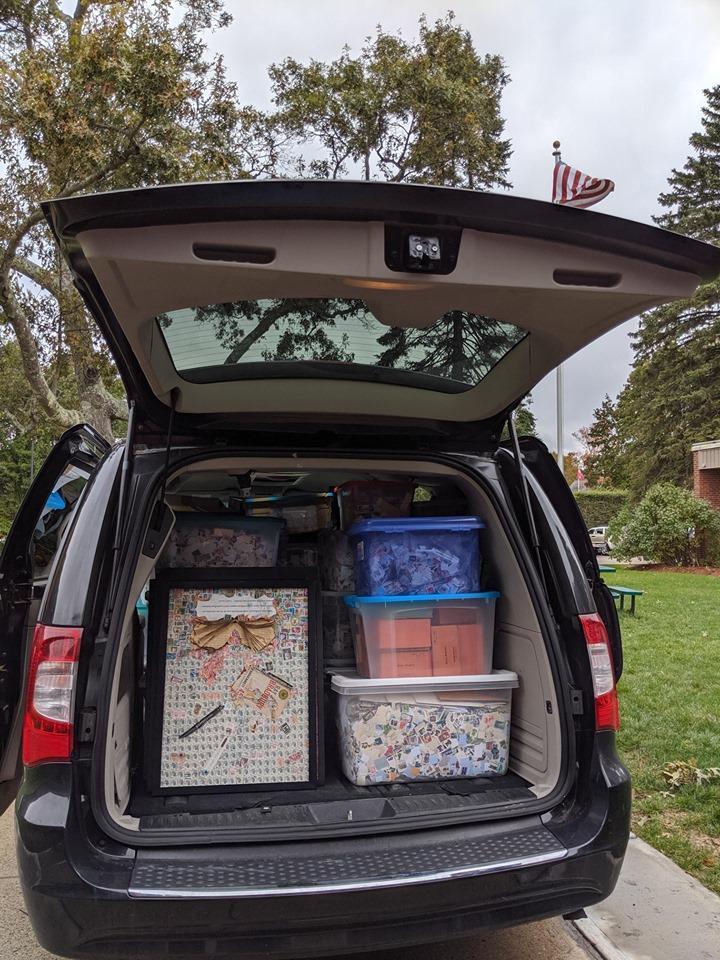 You can read more about the creation of the exhibit, here! We will keep you posted on the opening!

Each stamp that was collected symbolized one wasted life, “thrown away” as having no value, much the same way as an envelope bearing a cancelled stamp postage stamp is tossed in the trash.

Begun in 2009, the Holocaust Stamps Project is a component of community service learning (CSL), at FRCS.  It is a unique educational initiative that provides opportunities for students to gain a deeper understanding of how important it is to demonstrate acceptance, tolerance, and respect for diversity in their own daily lives.

The goal was to collect 11,000,000 postage stamps as a way to symbolically honor every victim of the Holocaust.  Students and community volunteers trimmed and counted thousands of stamps that arrived daily from across the country and the world.  The wide range of themes depicte – people, world history, places, flora and fauna, inventions, ideas, and values – leading to discussions about what makes our diverse world so special.

Eleven million is an unfathomable number. One and a half million were children. Six million were European Jews. An additional five million people were killed for being “different” or resisting the seemingly endless acts of disrespect, prejudice, discrimination, and cruelty by Adolf Hitler and the Nazi regime during World War II.

Students at the Kindergarten to grade 12 Foxborough Regional Charter School in Foxboro, Massachusetts collected cancelled postage stamps. To help them gain an understanding of the significance of that many people having had their lives taken. They collected and counted one stamp, one life, at a time.

Participants in the project learned about how one man’s intolerance and prejudice resulted in the annihilation of so many innocent victims from 21 European countries.  Their study of this period in world history has revealed that the dangers of discrimination and bullying are self-evident.

The Project received donations from 48 states, plus Washington D.C. and 24 countries.

Watch the wonderful video below and see the Holocaust Stamps Project in action.

Every stamp that the students touch brings them one step closer to understanding the immediate impact and long term effects of the intolerance and incomprehensible evil acts of the Third Reich during World War II.
As a pivotal part of the Holocaust Stamps Project, students are creating a series of 18 original, postage stamps collage artworks, based on events and effects of the Holocaust. 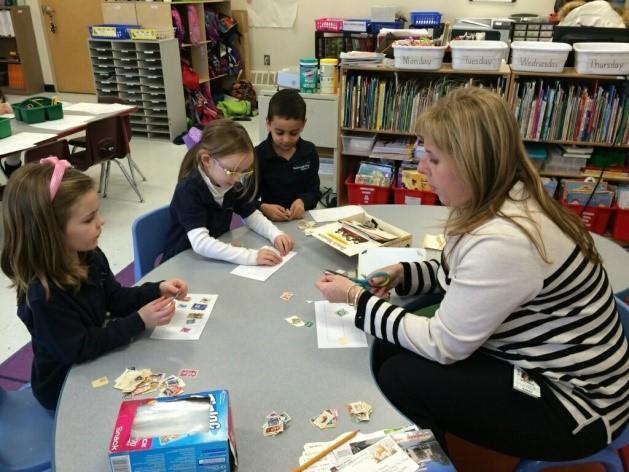 Congratulations to Heidi Solivan, her amazing kindergarten boys and girls, as well as high school students who volunteered to help out completed the twelfth artwork in the series of 18 planned Holocaust Stamps Project stamps collages. The students spent nearly every day for five months counting, placing and gluing the hundreds of domestic and international stamps to fit the outlined design created especially for them.
The finished product …”One World Community – Celebrating Our Diversity!”

In October, 2015, a dedicated group of teens completed the collage, “Music is a Dream”, which they designed to honor the memory of concert pianist Alice Herz Sommer. Ms. Sommer was the oldest living Holocaust survivor, age 110, at the time of her death in May 2014.

Left to right with their “Music is a Dream” collage:
Nancia Poteau, Temitope Faleye, Dairaneara Haith, and Marissa Durden.
The I AM THE LAST WITNESS stamps collage is complete! A labor of love to which dozens of students and community volunteers contributed over the past 3 years, using hundreds of donated stamps to create the “little people” that surround the one shoe found in the rubble of a liberated death camp.

To view the entire collage collection on the Views and Voices page click HERE. 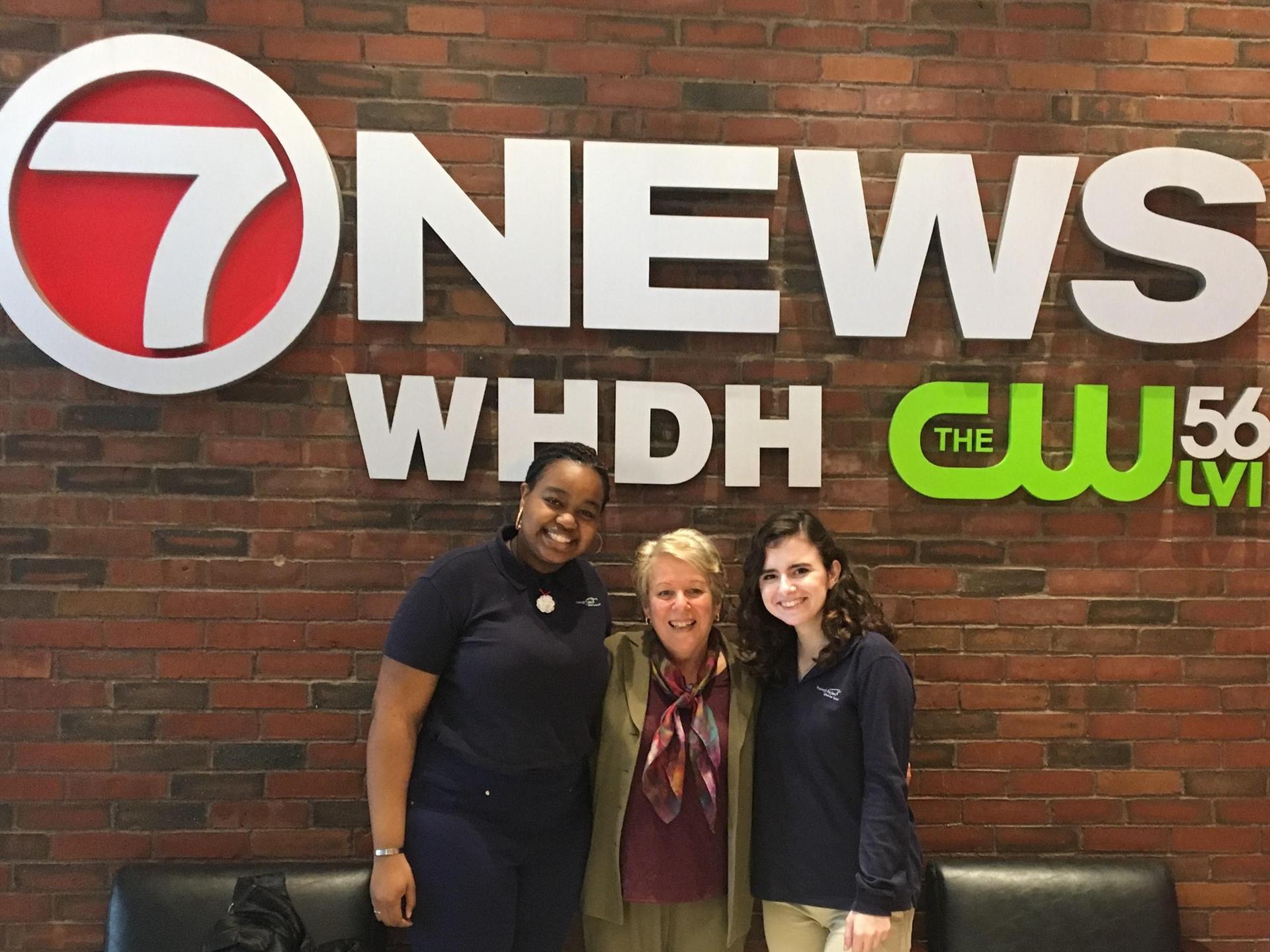 Tarah Valin (Student ’18), Charlotte Sheer (HSP Founder) and Sarah DeFanti (student ’18) visit the WHDH studios to discuss the HSP.
IN THE NEWS
CLICK below to read newspaper articles and watch news segments about the Holocaust Stamps Project.
The students ask many thoughtful questions, not the least of which is “Why?” And they also wonder how our world might be different today “if” one of the slain 11 million… might have been the scientist to discover the cure for cancer? Our goal is not only to honor the memories the 11 million Holocaust victims, but also to celebrate the lives of those who still survive today and bravely share their powerful personal memories and stories.

The Holocaust Stamp Project by the Numbers: