Lois Lowry – Biography ~ Born in Hawaii, Lois Lowry has lived all over the world and now divides her time between Maine and Florida. Her list of fiction includes 45 books for young people. Twice the recipient of the Newbery Medal, Lowry has received countless other honors for her work. In recent years she has traveled extensively, speaking to children in Spain, Germany, Belgium, Luxembourg, Indonesia, Japan, New Zealand, and Australia about the importance of literature and imagination in their lives. She is a mother and grandmother and has worked as a photojournalist as well as a writer of fiction.
Sam Weinreb Shares his Personal Story of Survival at FRCS April 30, 2017 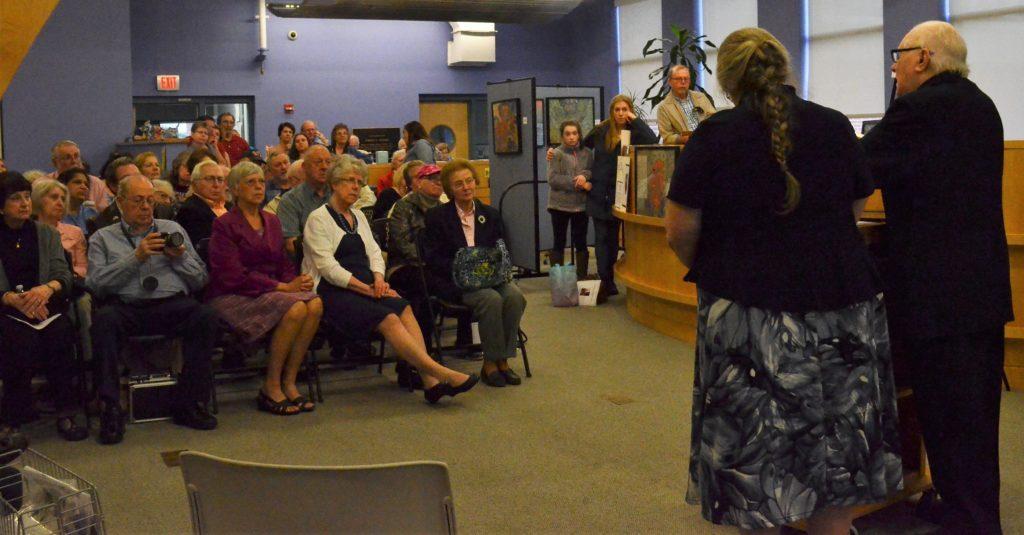 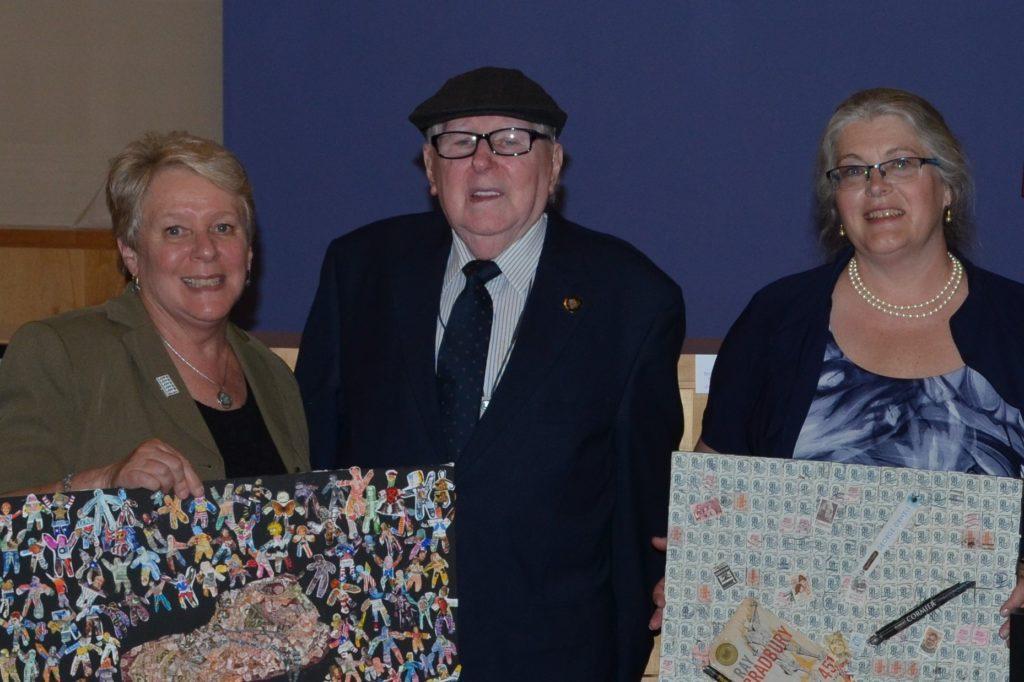 In spite of everything he endured to survive the Holocaust, 92-year old Sam Weinreb still believes, “You must always have hope.” Almost a hundred supporters of the Holocaust Stamps Project gathered last Sunday at Foxborough Regional Charter School to hear Weinreb share his personal story.

His life changed forever the day he returned from a Bar Mitzvah lesson near his Bratislava, Czechoslovakia home and found that the Nazis had captured his family. He never saw them again. Thirteen year old Weinreb made his way to Hungary and lived on the streets, begging for work and food, eventually seeking help from the police. They imprisoned him for the next two years, after which time he was deported to Auschwitz-Birkenau concentration camp. His name was replaced with the number A4659.

Sam was identified as strong enough to work. This saved him from being grouped with the elderly, mothers with children, and others deemed to be too weak, who were led to “the showers” where thousands were murdered every day in the gas chambers.

“One night, we were all awakened in the middle of the night and told to get ready at once. Outside it was snowy and icey, but we were ordered to march out of the camp, and keep marching.” He explained that the guards made it abundantly clear that those who could not stay on their feet would die. After three days, in the dark of night, he ran away from the line of marchers. “I was no longer afraid to die.”

Fortunately, the unconscious teenager was found in the forest and rescued by compassionate Russian soldiers. After World War II ended, Sam Weinreb came to America. He settled with distant cousins in western Pennsylvania where they taught him the family business and made it possible to make a new life for himself.

He married a young woman named Goldie, whom he had known as a child. With a warm smile, Sam told the audience, “Sixty-seven years we’re together now.” 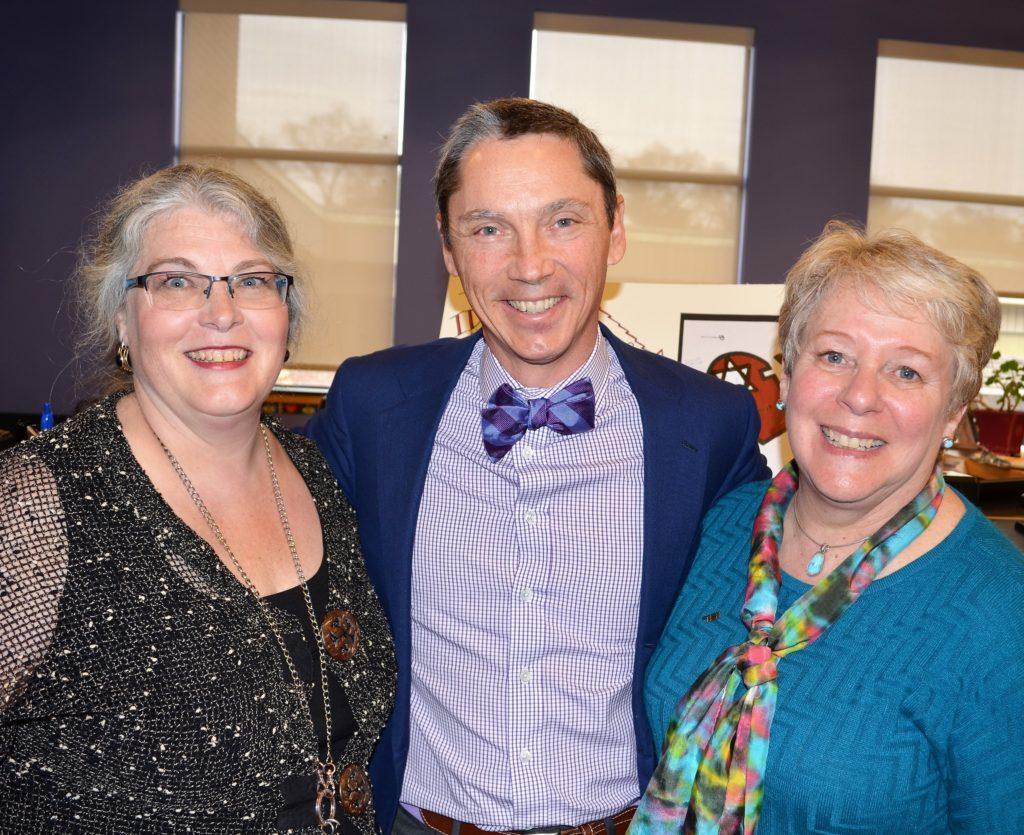 As a small child, Misha remembers his grandmother, Martha Sharp, often asked him, “What great thing are you going to do for the world?” That question provided the foundation for his personal set of values in which honesty, integrity and kindness are paramount.

In 1939, Vice President of the American Unitarian Association, invited the couple to accept a special mission in Europe to rescue refugees, including Jewish children, from the Nazis. Seventeen other couples had refused to go, but the Sharps agreed to leave their own two small children in the care of parishioners while they made the trip to Czechoslovakia, a country in the midst of destruction.

The details of their harrowing experience, and the effect it had on their individual lives and marriage, is detailed in the new (2016) Ken Burns and Artemis Joukowsky documentary film, “Defying the Nazis: The Sharps War” scheduled to air on PBS in September, 2016.
http://www.pbs.org/about/blogs/news/defying-the-nazis-the-sharps-war-a-new-film-by-ken-burns-and-artemis-joukowsky-to-air-on-pbs-september-20/
For their heroic actions to save Jewish lives, Misha’s grandparents, Martha and Waitstill Sharp, have been declared “Righteous Among the Nations” by Yad Vashem in Israel. They are among more than 26,000 non-Jewish individuals from 51 countries who have been so recognized. As of early 2016, only five Americans, including the Sharps had received this extraordinary honor.
We are grateful to Mr. Jakouwsky for sharing his grandparents’ inspiring story of courage and humanity. 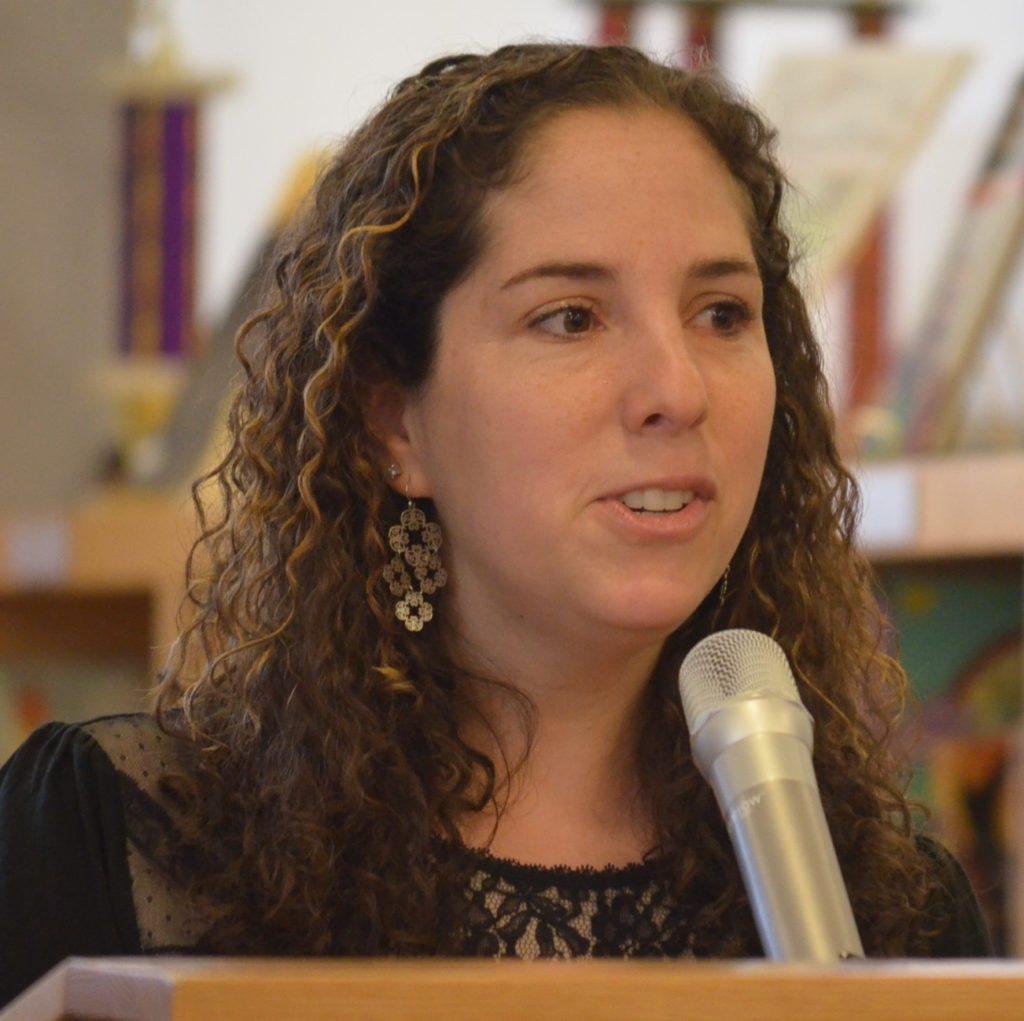 As a member of Boston 3G, Lisa Einstein, of Sharon, is committed to “preserving the memories and the legacy of the Holocaust from the perspective of the third generation (survivors).”

Her grandmother, Eva Reisner, (“Savta” in Hebrew), never talked about the pain and trauma she and her family endured while growing up as Jews in Hungary during World War II.  But during a trip to Israel, Einstein discovered that her grandmother had participated in a program that documented her personal story from childhood to immigration, including what life was like during the Holocaust. Einstein worked for a year translating the video to learn the incredible story of the astonishing challenges her grandmother had lived through.

The family lost everything when the Nazis seized her grandparents’ business and relocated them, first to ghettos and then to concentration camps. Sadly, she said, such cruel treatment was commonplace during the Holocaust.

When the cattle-car train delivered the 21 year old Hungarian to Auschwitz, Eva had no idea where she was, but she thought maybe this was where she would find  the family members from whom she had been separated, so she had a small glimmer of hope.

In her gripping narrative, Einstein described the extraordinary story of how Eva and her three sisters’ escaped from the camps.

The details of Eva Reisner’s story can be found online at <http://boston3g.org/eva-reisner-grandmother-of-lisa-einstein/>

The Holocaust Stamps Project is grateful to Lisa for sharing her grandmother’s harrowing story of resilience despite the inconceivable acts of inhumanity to which she and her family were subjected.

In January 2014, representatives from the Olde Boston Chapter of the National Society Colonial Dames XVII  Century arrived in period costume to personally deliver their stamp donation for the Holocaust Stamps Project.  The mission of their organization is “to aid in the education of the youth of our country”.

Wearing her red cape, Ellen McGrath, President of the local chapter which is based in Norwood , wearing her nurses cape member Carol Sansone and in the blue and yellow dress member Saundra O’Malley from Westwood were amazed  to see how large our stamps collection had grown since their last visit. They were very impressed with the newly completed Holocaust-related stamps collages, and the students they met.

Janet Singer Applefield brought her personal story of survival to Foxborough Regional Charter School on April 3, 2013. More than 150 attended her evening presentation.
Her pale blond hair and green eyes made her look more like a typical Aryan child than a Polish Jew. During World War II, the Nazis killed many in her immediate and extended family, including her mother and baby sister. Janet was the only Jewish child, from her home town of Nowy Targ, Poland to survive the Holocaust.
Her appearance at FRCS was co-sponsored by Boston 3G, a Boston-based group for grandchildren of Holocaust survivors.
FRCS student Katelyn Caradonna introduced Ms.
Applefield Singer to the audience.
Following Ms. Applefield’s appearance, guests were invited to work on two new stamps collages underway: L’Zachor-

To Remember and To never Forget and I Am the Last Witness. FRCS students will continue working on these two artworks as part of their Student Life and Community Service Learning activities.
Student Emily Graves presented our guest with an original sketch inspired by a photograph of Ms. Applefield Singer as a young girl, walking with her father, which she’d found posted online at http://www.janetapplefield.com/pictures.html. She completed the artwork in Ms. Meg Swanson’s studio art class.

Recently FRCS greeted New England Newspaper and Press Association, Hall of Fame member Jack Authelet and his wife Marge.  They brought with them several meaningful donations and toured our campus.  They asked thoughtful questions and shared stories about the stamps they were donating, collected by friends and family.

In his retirement Mr. Authelet is serving as the Historian for the Town of Foxborough. After reading a recent article by Christine Igo Freeman in The Foxboro Reporter, Mr. & Mrs. Authelet selected FRCS as the recipient for the following donations:

Friday November 9th, 2012 marked the 74th Anniversary of Kristallnacht, “The Night of Broken Glass”. By the eve of

the Kristallnacht anniversary the FRCS Holocaust Stamps Project had reached a collected stamps total of 1,500,128. One point five million Jewish children’s lives remembered! These stamps Benrepresent the 1.5 million children killed during the Holocaust.
In conjunction with this major milestone we shared the true life story of an FRCS family and a Kristallnacht survivor.
Kristallnacht, November 9, 1938 A true life story of a Foxborough Regional Charter School Family
Grade One student Benjamin Lambrecht is the only Great Grandson of Kristallnacht survivor Irene Klee. Young Irene Klee and her sister Else survived “The Night of Glass” or Kristallnacht on November 9, 1938 and fled for the United States. Please download here the dramatic and inspirational story and photographs of Benjamin’s Great Grandmother:

Additionally Benjamin’s father posted an emotional entry on his personal blog about their family’s unique connection to this time in history, which you can read here.

Special Thanks to Special Donors….

In October, 2012, representatives from the Olde Boston Chapter of the National Society Colonial Dames XVII  Century arrived in period costume to personally deliver 1855 stamps for the Holocaust Stamps Project.  The mission of their organization is “to aid in the education of the youth of our country”.

Ellen McGrath, President of the local chapter which is based in Norwood , and member Carol Sansone, were amazed  to see the accumulated stamps collection, of almost 1.5 million stamps, being stored in huge plastic tote boxes. They were very impressed with the five colorful Holocaust-related stamps collages, created by FRCS students in grade 5 to 8 during the 2011-2012 school year.

We were so fortunate to hear from someone whose direct experiences are often only read about in the history books.

This event served as an opportunity for us to better understand and appreciate the profound impact the Holocaust has had on the world both past and present. This lesson is connected to Mrs. Sheer’s 5th grade CSL Holocaust Stamps Project, in which students are learning the importance of respectful behavior, includingacceptance, tolerance and diversity. It is important to remember that embracing the differences among others in our society enriches our own existence. Along with our FRCS core values, this project demonstrates one way that our students learn that tolerance is respect, acceptance and appreciation of the rich diversity of our world’s cultures and forms of expression. This event was a perfect example of service learning as well as how our school enriches our curriculum through real life experiences. Thank you Mrs. Sheer for bringing this enriching experience to our school community!
Grade 11 art student, Mariane Kanellias painted “Just a Suitcase and a Doll”, based on the September 3, 2009 photo in The Jewish Chronicle of London, and of a re-enactment to celebrate the 70th anniversary of the Kinderstransport evacuation of 669 Jewish children from Nazi occupied Czechoslovakia to England. Eva Paddock gratefully accepted this token of appreciation. Thank you Mariane for creating this beautiful heartfelt gift.

Special thanks to  BOSTON 3G  for their assistance in making this program possible.  BOSTON 3G gratefully accepts donations to support their ongoing programs and to continue the work of this Boston-based group for Grandchildren of Holocaust survivors.

Please read reviews of the event in The Foxboro Reporter and The Sun Chronicle.