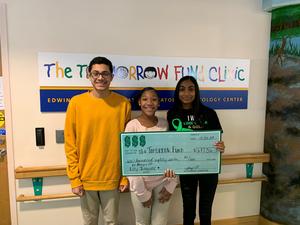 There is something exceptional about kids helping kids. Two eighth grade students in the Middle School made an impact not only on our school community, but on children experiencing cancer at the Hasbro Children’s Hospital.

The Tomorrow Fund, located in Providence, Rhode Island, is a non-profit organization that helps cancer patients at Hasbro Children’s Hospital with emotional and financial support. The Tomorrow Fund helped one of our community members, Lilly Toxavidis, who was diagnosed with cancer in 2017. By paying simple fees such as their parking bill and supporting the family, The Tomorrow Fund helped make the very difficult process a little bit easier.

In October 2019, the fundraiser began again; unfortunately it only consisted of Krisha Patel and Jasmine Scott since Lilly was re-hospitalized for a second cancer. The fundraiser ran from October 11th to November 16th during which pins made by Krisha and Jasmine were sold during the Middle School SLT period. The buttons were sold for a minimum of a $1 donation to the Tomorrow Fund, with the same grade-level prize of a dress down day for the grade that donated the largest sum of money. By the end of the month-long fundraiser, Krisha and Jasmine had raised a total of $437.36, and the buttons were seen all around the school, adorned on students and teachers alike. But it didn’t stop there.

The 8th graders reached out to PIE to contribute to the Tomorrow Fund Fundraiser, who graciously donated $250 to the cause, increasing the total amount donated to $687.36. Three 8th grade students traveled to Hasbro Children’s Hospital on December 12th to personally deliver the donation to the Tomorrow Fund, in loving memory of Lilly Toxavidis. The Executive Director met with these students to share memories of Lilly, and educate them on what services the Tomorrow Fund offers to children affected by cancer and where the money would be going. The students received a tour of the Tomorrow Fund offices, clinic, and camp locations.  Krisha shares “We will never be able to tell Lilly how much we raised this year, but we know she would be proud and grateful to everyone that donated.”

In total, the FRCS Middle School has raised $1,087.36 for the Tomorrow Fund over the past 2 years. No amount of words will explain how grateful we are to PIE and all the families that donated money.