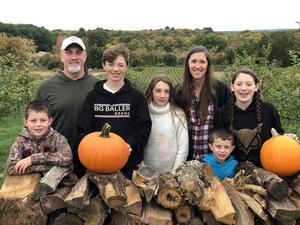 This Grade 5 Humanities educator is excited to be teaching here at FRCS!

Shannon Vitek has been in education for twenty-two years. After marrying her college sweetheart, she and her family moved from her home state of Colorado here to Massachusetts this past summer. She graduated from the University of Northern Colorado with emphasis in Social Sciences and went on to receive her Masters Degree in Curriculum and Instruction. She was involved in the Thinking Strategies Institute through PEBC and completed four years with the Teaching American History Grant program. Additionally, Shannon was a member of the Cimarron Middle School STEP Team, implementing Emergenetics into the classroom as an open lab for educators to further their learning and growth. Shannon received the Teacher Who Cares Award in 2014 by 9 News. In addition, the Gilder Lehrman Institute of American History awarded her the 2014 Colorado History Teacher of the Year Award which then provided her the incredible opportunity to travel to Oxford University for history studies in 2015 in the Age of Lincoln. Further provided by GLI, she was sent to stay on the Mount Vernon Estate for the Era of George Washington in the summer of 2016. The United States Marine Corps and the Rotary Club of Parker, Colorado presented Shannon with the Parker Impact Award Nomination for outstanding accomplishments and contributions for the Annual Veterans Day Ceremony held at Cimarron Middle School! She was also awarded Colorado Teacher of the Year for 2016-2017 by the Veterans of Foreign Wars.

Shannon is very excited to explore her new home in Massachusetts with her husband, five children and black lab. She feels incredibly honored to be a part of the FRCS team as one of the 5th grade Humanities educators