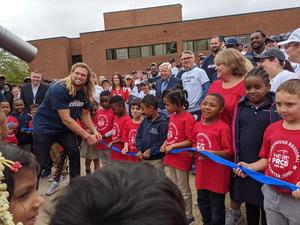 Thank you to our families, students, staff, and supporters who helped make this new playground a reality!

October 1st was a very special day at FRCS! More than 200 volunteers came together to build our new playground on the Elementary School Grounds in just six hours!

You might remember that over the summer, we were awarded a grant from KaBOOM!, a national non-profit that’s dedicated to ensuring all kids have a safe place to play. The grant was funded by UnitedHealthCare and the New England Patriots.

It was an incredible showing of community. About 75 FRCS High School students, and 40 FRCS parents and supporters joined 125 volunteers from UnitedHealthCare to construct the new play space.

The Ribbon Cutting was very exciting! Members of the New England Patriots – including rookie sensation Chase Winovich, and team owner Robert Kraft joined some of our first graders to for the grand reveal!  We also welcomed long-time supporter, Rep. John Barrows and State Sen. Paul Feeney. Rep. Barrows presented a citation from the Massachusetts House of Representatives, and Senator Feeney, a citation from Massachusetts state Senate. Thank you to KaBOOM, UnitedHealthCare, the New England Patriots, our FRCS families, students and staff who all came together to make this new playground a reality. Children will enjoy this new space to play for years to come!