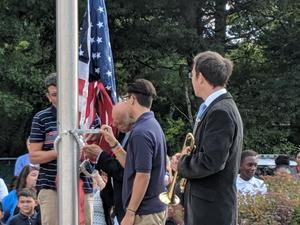 On Wednesday, September 11, 2019, our students, staff, local and state officials, and special guests, over 2,000 strong, gathered around the high school flagpole to participate in our annual September 11th remembrance ceremony.
Below, please find a letter to the FRCS Community from Dr. Logan regarding our annual 9/11 ceremony.

This morning, our students, staff, local and state officials, and special guests, over 2,000 strong, gathered around the high school flagpole to participate in our annual September 11th remembrance ceremony.

As many of you know, each year at FRCS, we come together to remember and honor those who lost their lives on that fateful day in 2001, to recognize and support the families who have been so traumatically impacted by that day’s events, and to celebrate the brave men and women who risked their lives in service of others.

We also take time to embrace the critical importance of respect, tolerance, compassion, empathy, service, and leadership.  Qualities and emotions central to the mission and vision of our school.

September 11th has been designated Patriot Day and National Day of Service and Remembrance by Congress and serves as our official school year kick-off to the amazing service and leadership projects we embrace here at FRCS.  Each month, we have designated education, awareness, and fundraising drives to support local, regional, and national efforts.  Students in all grades learn about recognizing and celebrating our similarities and differences, and how together, we can do incredibly powerful things.

We have both stand-alone and curricula-integrated service and leadership projects, designed to develop critical skills in all of us.  And this year, I am so proud of our National Honor Society students, especially Dan Currier and Daunte Pean, who created a full K-12 lesson plan about 9/11.  These amazing students worked hard this past year to develop a wide range of developmentally appropriate lessons and activities that bring greater depth and meaning to our remembrance ceremony.  From working to make our classrooms, school, and neighborhoods places of tolerance and respect to traveling to impoverished countries to help rebuild villages and schools, we are making an extraordinary difference for others in the spirit of this National Day of Service and Remembrance.

We were fortunate to have several special guests and presenters this morning.  Senator Paul Feeney and Representative Jay Barrows joined our ceremony.  We honored the service of three of our military veterans, Mr. Elsner, Mr. Middlemiss, and Mr. Obenchain, and our School Resource Officer William Monterroso.

Chris Mitchell, Foxborough selectman and founder of the non-profit Foxboro Never Forgets donated a new flag which was ceremoniously raised then lowered to half-staff.

Our Music teacher Misha Grandel, who served for three years in the Israeli Defense Forces (IDF), playing in the IDF orchestra, helped make this part of the ceremony special by performing Fanfare and Taps on the trumpet.

FRCS Senior Darvanie Charles performed her beautiful rendition of the National Anthem, and our senior class officers led the school in the Pledge of Allegiance.

Cindy McGinty was our special guest speaker.  Cindy is a former parent and trustee here at our school.   She is also a great friend and a personal inspiration.

Cindy’s life and the lives of her sons, Daniel and David, were turned upside down when her husband, Mike, was forever taken from them while he worked in one of the twin towers on September 11th.  Those filled with hate tried to destroy our country and our culture.  And while the pain was vivid, and still remains so for many to this day, those terrible acts did not achieve their intended goals.

Rather, they awakened a resolve and spirit in the survivors, the responders, and our country’s citizens.  Cindy was one, through her grief and pain, who refused to give in.  Instead, she stood up.  And rose up.  And spoke up.  And led…with courage, compassion, and grace.

She committed herself to tirelessly working across our nation to unite us and to strengthen our sense of purpose and community of caring.  She serves as a leader to keep alive the spirit of unity and compassion that arose in the immediate aftermath of the 9/11 attacks.

She is a founder of the Massachusetts Military Heroes Fund.  She served on the Family Advisory Committee for the Mass 9/11 Fund, and she is the Founder and President of the McGinty Scholarship Foundation, which provides scholarships to local HS students, including those attending our school. Over the years, through her professional endeavors and personal interactions, Cindy has exemplified the qualities I mentioned earlier:  respect, tolerance, compassion, empathy, service, and leadership.  In short, she cares about others and has made it her priority to be kind, to give back, to strengthen our communities, and to make a difference.

It was a great honor that Cindy and her son, David, shared this very special day with us.

The ceremony continued with two of high school students participating.  Eric Morris read List of “Don’t Forgets” and “Remembers” while Marian Awuah recited We’re Still Standing.  They added a special touch to the ceremony by presenting these poems.

As we approached 8:46 a.m., we held a Moment of Silence in honor of the time the first plane struck the World Trade Center’s North Tower.

We concluded with me reciting our annual special poem, Tomorrow (Today) by Michael Mack.

I want to thank our students and staff for their cooperation and participation this morning.  Again, the students exemplified outstanding manners throughout the ceremony.  Families would have been proud of their thoughtful and respectful attention.

Enter to Learn.  Exit to Lead.